Dr Alex J. Wood discussed the implications of the recent UK Uber Employment Tribunal ruling on BBC News. The court decided that Uber must classify its drivers as workers. The ruling means that, pending appeal, Uber drivers are entitled to the national minimum and living wage of £7.20 an hour, rest breaks and sick pay. 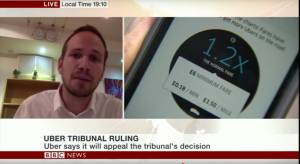 e ruling is a positive development for drivers, who in reality lack the autonomy and control necessary to be considered genuinely self-employed. Uber should either accept its drivers are workers or increase their autonomy and so that they can realise the benefits of self-employment.

Watch Alex here or read the transcript below:

Interviewer: ‘How does Uber employment in the UK compare to Uber and similar employment around the world, could we see global employment change because of this ruling in the United Kingdom?’

Alex: ‘I think it will have very big implications as governments around the world are now starting to think actually we need to look at the reality of what’s going on in employment in the gig economy and are thinking can we actually regulate it, are these companies just technology companies or are they actually employing people in some case. So in New York recently, the court there has decided that two Uber drivers are actually employees and now we have this ruling in UK. So I would say the general strategy of Uber across the world is to say ‘we’re just a technology company, we’re just connecting these two entrepreneurs or these two people who want a service, it’s nothing to do with us the nature of employment.’ And now governments are saying ‘actually it doesn’t matter what you’re saying, actually we have to look at the reality, so it’s going to have a very large impact across the world.’

Interviewer: ‘So what we’re talking about here, my understanding of it, is a gig economy, this is where you are self-employed, you pay your own taxes, your responsible for your own employment but you go to a company like Uber to get you the work, so does Uber have a point in portraying itself as a technology company which affectively acts as an agent?’

Alex: ‘I think a really important thing is that it’s true that a lot of the drivers do want to be self-employed because people value the autonomy they can have but if you’re gonna treat people as if they are self-employed in terms baring the risks or in terms of not getting sick pay, not being paid in a minimum wage you also have to give them the autonomy over the other parts of their work and at the end of the day Uber has a huge amount of control over the workers. So at the end of the drive workers will be rated and if they don’t get a high enough rating they will be deactivated from the service, so effectively fired and they can’t decide that [whether they continue providing a service] with clients it’s not them that’s deciding whether they are going to pick up a client or not, it’s the platform which is deciding, its not them that’s setting the rate, it’s the platform that’s setting the rate.’

‘So I think a really interesting aspect of this, is that if Uber doesn’t win on appeal, whether they will change their practices so that they recognise that their drivers are workers or will they continue to have a self-employed model whereby they actually provide a lot more autonomy and control to the workers. So I think either way it’s a good thing and that doesn’t necessarily mean that worker status is the best solution for all workers. But if drivers are classed as self-employed they should get the benefits which we usually think of going with being self-employed which are autonomy; getting to decide when you work and how you work.’