In our last iLabour blog post we looked at the response of online labour markets to the COVID-19 pandemic and realised that the downscaling effect might be dominating over the distancing effect: Demand for online work diminishes, as companies are facing declining revenues and reduce non-essential spending, including external contractors.

The global demand for online freelance work is strongly influenced by demand from the United States, as the US represents approximately half of all the demand for online labour measured by the Online Labour Index. However, the United States was not the first economy to be impacted by the pandemic and its countermeasures. Our data allows us to assess how online labour demand has changed in early 2020 across different countries. In our most recent working paper contribution “Distancing Bonus or Downscaling Loss? The Changing Livelihood of US Online Workers in Times of COVID-19” we examine three important regional economies with different COVID-19 trajectories and responses: United States, Germany, and South Korea. 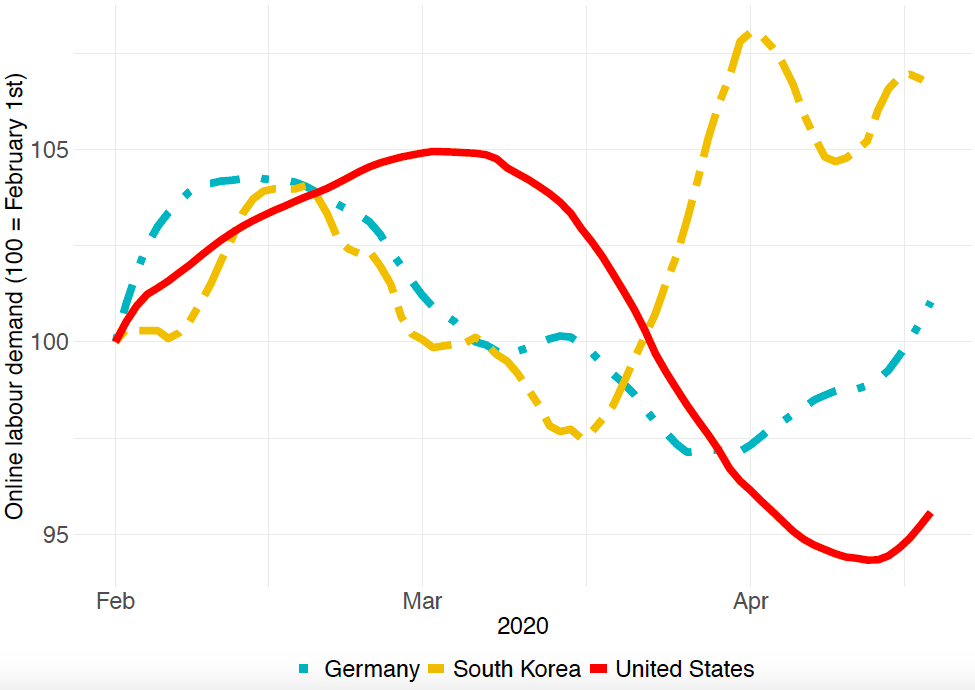 Demand of online labour from Korea, Germany, and the United States between February and April 2020. Source: Online Labour Index.

The figure shows a cross-country comparison of online labour demand from the United States, Germany, and South Korea. Each country shows a distinct pattern. South Korea was one of the first economies that had to face the consequences of COVID-19 early in 2020. Demand from South Korea fell from mid-February to mid-March, but bounced back rapidly in late March. Demand from Germany similarly fell from February to March, and experienced a more modest rebound in April. Demand from the United States started falling roughly two weeks later than the demand from South Korea and Germany and by mid-April was showing only a small uptick. These patterns are consistent with the idea that the pandemic reached the United States later than it reached South Korea and Germany, and that South Korea in particular has already been able to roll back some of its countermeasures, or adjust to the new normal of online work.

Given the particularly clear drop in demand for online labour from the United States, we are interested in how this drop may vary across different types of work, which we will explore further in our upcoming research contribution.